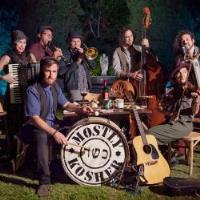 Join Los Angeles’s Klezmer-Rock Band, MOSTLY KOSHER! Hi, we are Mostly Kosher! Nice to meet you. We had hoped to be at the Tower Theatre last March, but we all know what happened then. We are looking forward to joining you in person in spring of 2022, but in the meantime, we have put together a Mostly Kosher retrospective of past performances and music videos. We hope you’ll join us for a live Q&A afterwards. We hope to meet you at this unique virtual Passover get together! How is this performance different from all other performances? This specially curated offering is a FIRST for Mostly Kosher - a decade’s worth of Jewish cultural music!  Mostly Kosher, the acclaimed Klezmer-rock band, radically reconstructs Judaic and American cultural music through ravenous klezmer beats and arresting Yiddish refrains. Mostly Kosher is a musical feast that explodes into a global food-fight of Jazz, Latin, Rock, and Folk. In response to the poetry and folk music of Judaic roots, their original voice resounds with themes of social justice, human dignity and mutual understanding.  Led by frontman Leeav Sofer, one of Jewish Journal’s "30 under 30" most accomplished professionals in the Los Angeles Jewish diaspora, Mostly Kosher is comprised of some of the highest regarded Los Angeles musicians: violinist Janice Mautner Markham, drummer Eric Hagstrom, bassist Adam Levy, accordionist Gee Rabe, trombonist Taylor Covey and Aníbal Seminario on clarinet and sax. Mostly Kosher is a fixture at renowned Southern California stages such as the John Anson Ford Amphitheatre, Skirball Cultural Center, Torrance Center for the Arts and Livermore Valley Performing Arts Center. They have also graced the stage of the Dorothy Chandler Pavilion for a live television broadcast to over half a million viewers in 2015, 2017 and 2019. The ensemble has headlined multiple summer festivals including the Silicon Valley Jewish Music Festival, Claremont Folk Festival. Mostly Kosher had the honor of being the first Jewish music ensemble at the Disney parks with 2020 marking their fourth season performing during the 2-month long Festival of Holidays. Mostly Kosher was credited for “stealing the Festival of Holidays Show” by the acclaimed Fresh Baked Disney podcast. For the 2017 holiday season, Mostly Kosher added Epcot Center in Florida to their list of holiday performance venues, becoming Disney’s first Jewish cultural music performed on both coasts.  Mostly Kosher will be kicking off their 2022 live performance schedule with a southwest tour beginning with the Chandler Performing Arts Center, Arizona, in January - stay tuned for more upcoming dates and song/video releases! More about Mostly Kosher: www.mostlykosher.com Instagram/Facebook: @mostlykosher