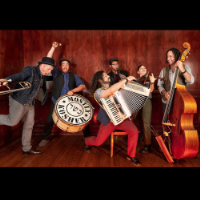 Mostly Kosher is a fixture at renowned Southern California stages such as the John Anson Ford Amphitheatre, Skirball Cultural Center and The Torrance Center for Performing Arts. They have also graced the stage of the Dorothy Chandler Pavilion for a live television broadcast to over half a million viewers in 2015 and once again in 2017. Most recently, Mostly Kosher had the honor of being the first Jewish music ensemble at the Disney parks and performed a 2 month residency at Disney California Adventure, featured in the Festival of Holidays. Mostly Kosher was credited for “stealing the Festival of Holidays Show” by the Fresh Baked Disney podcast. For the 2017/2018 holiday season, Mostly Kosher added Epcot Center in Florida to their list of holiday performance venues, becoming Disney’s first Jewish cultural music performed on both coasts. The band’s self-titled debut album has won international acclaim by World Music Network, Songlines Magazine, and BBC radio. The first track, Ikh Hob Dikh Tsufil Lib (I Love You Much Too Much), was recognized as one of World Music Network’s Top 6 Songs of 2014. Mostly Kosher’s music videos have been garnering accolades on the film festival circuit, receiving two nominations at the Idyllwild International Festival of Cinema and Best Music Video at the Glendale International Film Festival. They are looking forward to going back into the studio to record a second album in the summer of 2018, so stay tuned!