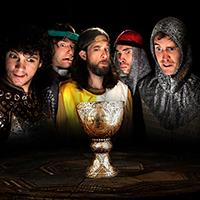 Director David DaCosta has been working with a cast of 22 local actors. “We've harnessed some unique comedic creativity while staying true to the essence of Monty Python. Our goal is to give your stomach a workout with belly laughs!”

Stage Right Productions is a recently-formed nonprofit company supporting local performing arts through 2nd Street Theater in Bend. Stage Right has produced Working, Evil Dead the Musical and Sordid Lives. “We are thrilled to be included in the Marquee Series and to bring such a colorful, hilarious and incredibly silly show to the Tower,” says Sandy Klein of Stage Right Productions/2ndStreet Theater. “There are so many talented people in our community; we’re looking forward to finding our Lancelot, Arthur, Lady of the Lake, and Black Knight!”