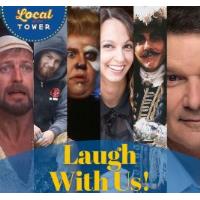 MOVIES AT THE TOWER

Feel like the only way left to react to 2020 is just to laugh? Yeah, us too! Come to the Tower Saturdays in October and enjoy cinematic comedy classics, each personally selected by and introduced with a special performance from a local comedian. Politically incorrect and potentially hilarious. Consider it your COVID survival kit, courtesy of the Tower and Ipockolyptic Productions.

Just When You Thought You Were Saved....

Brian — a young man born the same night as Jesus, just one stable down — becomes intrigued by a young rebel, Judith. To impress her, Brian joins the independence movement against the Romans, the People's Front of Judea. Attempting to elude the Romans, he repeats some teachings he heard from Jesus, spurring a crowd to believe that he is the Messiah. Stunned, Brian must now get rid of his followers and, through a series of misadventures, reunite with Judith.

Carl Click is a retired Emmy-winning broadcast journalist. He spent 31 years as a news reporter, anchor and local host at Portland’s KGW-TV and KATU-TV. Carl moonlighted in the Portland comedy scene in the ’90s, opening for several nationally-touring comics. Now, he's rekindled his thirst for laughs, telling stories and performing comedy songs all around Central Oregon.

Our relaunch plan adheres to the guidance from Governor Brown, the Oregon Health Authority, and the Deschutes County Health Services. Here are some important changes you’ll notice attending a performance at the Tower Theatre: • 6’ physical distancing between groups must be respected at all times. • Face coverings are required and will be available to those who do not bring one. • Intermissions will be limited or, whenever possible, eliminated entirely. • Seating will be assigned by Box Office staff. • Common touchpoints will be sanitized before, during, and after performances. • Multiple hand-sanitizing stations have been installed for your convenience. • Guests will be encouraged to leave by rows to avoid crowding while exiting. For further details on the Tower Theatre Foundation’s re-opening and operating procedures please click here. Patrons will also receive an event-specific email prior to attending events. We thank you for your patience and understanding, and we look forward to seeing you soon!​​