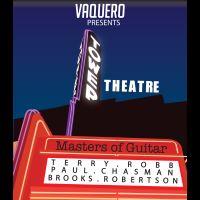 
Brooks Robertson is an internationally known guitar prodigy from Eugene, Oregon. As the protege of the late Buster B. Jones, Brooks has had the opportunity to befriend and accompany many legendary guitarists including: Thom Bresh, Tommy Emmanuel, and Richard Smith. In 2004, Brooks performed on NPR's "A Prairie Home Companion" where he took 1st place in a national talent competition for 12 to 20 year old participants. He also entered the "Yamaha Six String Theory Guitar Competition" in 2010 where a star-studded jury, including Steve Lukather and Lee Ritenour, eventually chose him as winner of the country category and second place winner overall. Recently, Brooks won The Deli Portland's Readers and Fans' Poll for "PDX Best Emerging Artist of 2012". Though young in age, his skills and musical knowledge are praised by many in the guitar world.

Paul Chasman's music has been described by Guitar Player Magazine as:
"Spellbinding, imaginative, sensitive. A fine example of a guitarist's devotion to the full exploration of his instrument's capabilities." In 2011, Paul Chasman released a CD, "One Man Guitar Festival", celebrating 50 years of guitar playing. Shortly after that release, he required surgery on his left hand (due to 50 years of guitar playing). While recovering and barely able to hold a "G" chord, he wrote a song. Then he wrote another and another, and then he could not stop! Now, with the release of his first vocal CD, "BASICS", he has completed his reincarnation as a singer/songwriter. Armed with guitar and harmonicas, Paul delights his audiences with songs about life, love, dogs, cats, and Muhammad Ali. And guitar fans need not fear--there is still plenty of dazzle in Paul's fingers.

In regards to acoustic artists, there are few who can share the stage with Terry Robb and his guitar. His complex combinations of blues, ragtime, jazz, folk, and roots music have been praised throughout the musical world. Making his home in the Northwestern US, Terry has toured the globe with many headlining acts including Buddy Guy, Steve Miller and JJ Cale. In 2009, Robb was inducted into the Oregon Music Hall of Fame and in 2011 the prestigious Cascade Blues Association named the Terry Robb Acoustic Guitar Muddy Award in his honor. To say Terry Robb has been amazing is to greatly underestimate his current and future effect on the North West, National, and International Music Scenes. Terry Robb - An Elegant Master of Roots Guitar

A concert bill of this magnitude is sure to attract attention, so don’t miss the opportunity to purchase an advance ticket and see the show. Tickets will be sold through the Tower Theatre box office and online at www.towertheater.org.