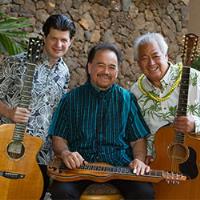 Four-time Grammy-winner, master slack key guitarist GEORGE KAHUMOKU JR., known as “Hawai‘i’s Renaissance Man”, is a multiple Na Hōkū Hanohano (Hawaiian Grammy) Award winner, a vocalist, storyteller, songwriter & author, teacher, sculptor, farmer, and chef. Guitar virtuoso JEFF PETERSON is one of the most versatile musicians in Hawaiian music today. Specializing in Slack Key, Classical, and Jazz guitar, he has contributed to two Grammy-winning recordings and has been honored with 8 Na Hōkū Awards (Hawaii’s “Grammy”). Five of his songs are in the George Clooney film The Descendants. Slack Key Guitarist, Lap Steel Guitarist, vocalist, songwriter, and producer, SONNY LIM developed his guitar & vocal styles performing with his famous Lim Family of the Big Island. He was also one of the early members of the renowned Makaha Sons of Ni‘ihau for whom he played lap steel guitar beginning at age 15. He performed on the first Grammy-winning CD in Hawaiian music, and has won multiple Na Hoku Awards on his solo CDs.