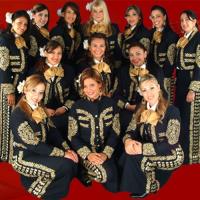 Directed and founded in 1999 by trumpet player Cindy Shea, the Mariachi Divas continue to lead the way in the mariachi genre. A two-time GRAMMY Award winner, with a total of six GRAMMY nominations and two Latin GRAMMY nominations, the Mariachi Divas are a multicultural, all-female ensemble imbued with the unique musical flavor of Los Angeles.  The Divas discography includes 10 albums released through Shea Records and East Side Records.

In addition, the Divas have appeared in independent films including Dead Man's Shoe, Ren and La Dentista, in which their music is featured in the movie's soundtrack.  The Divas' rendition of the Ricky Martin hit, “La Bomba” was used in the 2008 film, Julia.  Their music is also included in the movie, Mariachi Gringo, and two of their Christmas songs are featured on Hallmark cards.

Since 2003, the Mariachi Divas can be seen performing weekly at the Disneyland Resort in Anaheim, California.