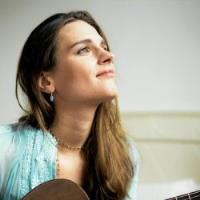 Keep Me in Your Heart for a While: The Best of Madeleine Peyroux, the debut anthology of the critically acclaimed, singer-songwriter’s nearly 20-year career.

Peyroux, whose voice has often been compared to that of Billie Holiday’s, was discovered while in her early twenties, when Beauvais spotted her at a New York club. He recalls the worldly singer’s set to be “some of the most exciting, viscerally moving minutes of my music-listening life.” Beauvais subsequently signed Peyroux to Atlantic and co-produced her 1996 debut Dreamland.

Prior to this life-changing performance, the American-born Peyroux was a musician on the streets of Paris. A precocious teenager, living abroad with her mother, Madeleine quickly became entranced with local buskers, spending much of her time accompanying a regular band on the sidewalks of the Latin Quarter with her distinctive voice, and, by 15, had dropped out of school to join a touring blues and jazz band.

Following the whirlwind release and promotion of the critically acclaimed Dreamland, the 22-year old Peyroux disappeared from the limelight, just as the buzz surrounding the singer was at its peak. Health issues were partly to blame, but the pressures of a quick rise to stardom in the jazz world became overwhelming. Peyroux took time to find herself, and, in doing so, returned to her first love of busking.

When she finally felt ready to return to the studio, Madeleine was paired with renowned producer Larry Klein (Joni Mitchell, Tracy Chapman, Herbie Hancock) — a match that would prove to be a successful one, stretching over several, subsequent albums. The result was 2004’s Careless Love (Rounder) — a diverse collection of covers penned by everyone from Elliott Smith to Hank Williams. Breakout track “Don’t Wait Too Long” helped push Madeleine into the mainstream by topping the jazz charts and appearing in national commercial spots and film soundtracks.

Peyroux followed the success of Careless Love with 2006’s highly anticipated Half the Perfect World (Rounder). The singer-songwriter once again paired original material (“I’m All Right,” among them) with an eclectic selection of covers (paying homage to the likes of Joni Mitchell, Tom Waits and Serge Gainsbourg). 2009’s Bare Bones (Rounder) shook up the prototype, and featured all original compositions by Peyroux, including the likes of the upbeat and twangy “Instead.” Continuing her artistic growth, Madeleine released Standing on the Rooftop — her debut with Decca Records — with a new producer, GRAMMY® Award-winning Craig Street (John Legend, k.d. lang, Norah Jones).

Peyroux’s most recent recording project, 2013’s The Blue Room (Decca), found the singer-songwriter once again teaming up with Larry Klein, and paying homage to Ray Charles’ classic 1962 LP, Modern Sounds in Country Western Music. Covering a handful of Charles’ songs from the album, and adding such fitting tracks as Randy Newman’s “Guilty” and Warren Zevon’s “Desperadoes Under the Eaves,” Peyroux melded multiple genres, creating an album that floated in the ether between jazz, country, blues and pop.

A living document of her artistic metamorphoses, Keep Me in Your Heart for a While … combines the poignant with the charming, the old with the new, and the standard favorites with the original compositions. Beauvais writes of his protégé, “Whether she sings Leonard Cohen (“Dance Me to the End of Love”), Bob Dylan (“You’re Gonna Make Me Lonesome When You Go”) Charlie Chaplin (“Smile”), Edith Piaf (“La Vie en Rose”), or post-punk songster Elliott Smith (“Between the Bars”), [Madeleine] brings to this most diverse material the same beguilingly cautious, respectful, and crystal clear way with the melody, the same revelatory focus to the lyric’s delivery.”