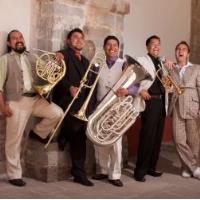 The M5 theatrical show Brasscinacion  is a delightful blend of great music, outstanding musicianship, effortless virtuosity, humor, and a winning rapport with the audience. Whether playing Bach, Bernstein, Humperdinck or Piazzolla, this concert by Latin America's foremost brass quintet is fun, surprising and unexpected!

Since it’s founding in 2005, M5 MEXICAN BRASS have established themselves as Mexico's leading
Brass Quintet with international recognition. Combining their skills at virtuosic chamber music in all styles, non-stop interaction with the audience, inborn showmanship, inimitable Latin American charm, and their very own sound, M5 concerts are unique musical- theatrical concert experiences.

Being one of Mexico ́s most active cultural ambassadors, the group has been touring the US and
Canada extensively since 2008. M5 made its South America debut in 2012 in Colombia, performed in Algeria, Africa in 2013, China in 2014 and Chile in 2015. M5 MEXICAN BRASS has performed in renowned venues as the Kennedy Center in Washington DC and the Nezahualcoyotl concert hall in Mexico City. M5 shared the stage with worldwide-celebrated musicians like Fred Mills and Jens Lindemann. A large percentage of M5’s activities are dedicated to education, whether school concerts, workshops or master classes. In the 2014/15 season, the quintet performed educational concerts for more than 30000 children in Mexico, the US and Canada. An increasing number of contemporary composers write new works for M5.