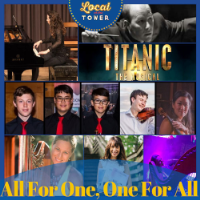 Danielle started her musical training at age six, when she started taking classical piano lessons.  Music quickly became her passion and outlet, and has been the center of her life everyday since.  Her mother is a self taught guitarist/ singer songwriter and with her guidance she learned to play guitar at age 12.  She always had a fascination with the harp and received her first harp as a gift on her 20th birthday. She started taking harp lessons right away and studied under Melissa Morgan, Naomi Alter, and Mindy Ball in Southern California.  Music therapy was her major at Chapman University and it was there she was able to sharpen her skills and study all three instruments.

Danielle went on to play in a band for solo artist Mimi Zulu, and with her has opened for Macy Gray, Quantic, and Beats Antique. They have headlined the Belly Up, Music Box, and the Casbah.

She has recently relocated from Southern California to Bend and is delighted to bring her music and talent to Central  Oregon.

Paula Dreyer is a classically-trained pianist and composer, making music in a unique style influenced by classical, Spanish, film, and improvisational music. She is delighted to premiere and perform works from her new album Central Star at the Tower Theatre. Known for her transporting and mesmerizing performances, Paula has graced world-class stages in the U.S., Canada, Nicaragua, Prague and Spain. She has been an Artist-in-Residence in Portugal, where she composed much of the music for her globally successful Little Gems for Piano educational series. She is also a well-respected educator and presents nationally to music teachers.

In her debut original solo album Central Star, Paula tells a personal yet universal story about the powers of imagination, intuition, and creative expression during challenging times of uncertainty, as well as offering a therapeutic medium during everyday life. This spellbinding album speaks to the triumphant yet calming creative experience. For more information, see www.pauladreyer.com and follow @littlegemsforpiano on Instagram.

To see and hear more:
https://youtu.be/jDdndXA1x8E