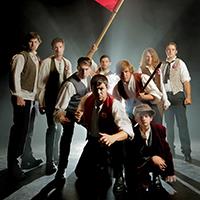 “Les Misérables is an epic tale of revolution,romance, and redemption that presents a powerful affirmation of the human spirit told  through some of the most beautiful and memorable music ever written for the theatre.  The story is set in 19th century France and focuses on convict Jean Valjean, who is on the run while being hunted relentlessly for breaking his parole by his adversary, Police Inspector Javert.  Valjean has no choice but to fight for his life and sacrifice everything to honor the promises he has made and protect the people he loves.

“Les Misérables” will have its Central Oregon premiere when it opens at the Tower Theatre, as part of its Marquee Series, on September 12, 2014 for a limited run of eight performances.  “Les Misérables” is being produced by Shore Thing Productions, th e company that staged  “1776” In Concert with an all female cast at the Tower in 2012.

THANK YOU to our Sponsors