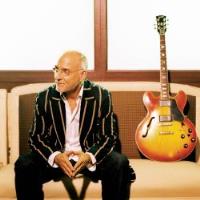 Unfortunately, this livestream event has been cancelled due to circumstances beyond our control.

Unfortunately, this livestream event has been cancelled due to circumstances beyond our control.

Tickets:  $89  (20% of each ticket purchase goes to support the Tower’s education fund)

Throughout his master class, Larry focuses on his love of blues, jazz, and fusion. He helps his audience to explore the different approaches comping and soloing over choruses, as well as how to support a solo musically and develop personal solos. His goal during his courses are to help players better understand improvisation, rhythm playing, and soloing skills to help each musician find his or her voice.

Larry’s classes offer the absolute most in diverse opportunities for students to not only interact and understand a top professional and his techniques, experiences and history, but to gain personal knowledge about the world of music through this living legend’s eyes. His main objective is to share his knowledge and experience with students throughout our nation and world.

Larry also brings with him his extensive collection of recordings, spanning over 30 albums. Larry brings his background of 3,000 sessions, 200 hit records and over 100 gold and platinum albums that have sold over 250 million copies to his credit. Carlton has his fingerprints indelibly imprinted on virtually every genre of music. He uses his recordings as a tool to communicate different techniques, as well as to give his audience greater insight to each song and its history.

In an attempt to better connect with his audience, Larry keeps the session open with opportunities to ask questions and communicate candidly.

Nineteen-time Grammy nominee, Four-time Grammy winner and all-time guitar great, Larry Carlton established himself from his first recording, A Little Help From My Friends.
His studio credits include musicians and groups like Steely Dan, Joni Mitchell, Michael Jackson, Sammy Davis Jr., Herb Alpert, Quincy Jones, Bobby Bland, Dolly Parton, Linda Ronstadt and literally dozens of others. He went on to perform with the Crusaders and then with the multi platinum jazz super group Fourplay.
With 38 albums to his credit and having performed on over 100 albums that have gone Gold or Platinum, Larry Carlton has set a standard for
artistry that spans three decades. Additionally Larry received a Lifetime Achievement Award from Guitar Player magazine at the historical Ryman Auditorium; was presented the "Titan of Tone" award from Premier Guitar Magazine at the Rock and Roll Hall of Fame and received a star on the Rock Walk of Fame on June 3, 1999.
Larry's recent Grammy Nominations include Best Pop Instrumental Album for his "Greatest Hits Rerecorded - Volume One" released by 335 Records in 2009; and Best Pop Instrumental Performance for "Fortune Teller" from Fourplay's Energy also in 2009.