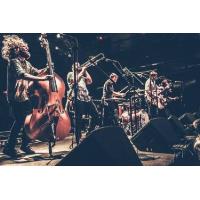 Larry and His Flask are a high energy, sextet carnival of a band that incorporate rock, folk, bluegrass, soul, marching band, punk and alt-country into their own unique sound. Lauded by the new york times for one of the most dynamic live bands around.

Tickets:  General Seating $17 (seats out down front for dancing!)

Some people call what they do “folk-punk”, others call it “a bluegrass traveling circus” and everyone who’s seen them live rightfully call Larry and His Flask “down right WILD”. But no matter what you call it, this is a band that has to be seen to be believed.

The Flask hails from central Oregon, smack dab in the middle of the beautiful Pacific Northwest, and is comprised of Jeshua Marshall on contra bass and baritone, Ian Cook on electric guitar and lead vocals, Andrew Carew on banjo, trombone and vocals, Dallin Bulkley on acoustic guitar and vocals, and Jamin Marshall on drums and vocals.  Since brothers Jeshua and Jamin Marshall founded the band in 2003 the band has gone through several lineup changes and fundamental changes to their sound, but they have always held true to their reputation for an foot-stomping, mind-blowingly great time.

LAHF have toured the globe many times and have shared the stage with such acts as Streetlight Manifesto, Decendants, Wanda Jackson, The Dropkick Murphys, Lucero, Old Man Markley, Pokey Lafarge and the South City Three, Reverend Horton Heat,  Strung Out, Trampled by Turtles, Less Than Jake, Against Me!, Andre Williams, Blackalicious, Gym Class Heroes, Paramore, Jenny Owen Young, and Frank Turner and the Sleeping Souls.