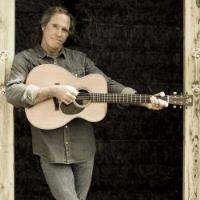 Few among us could distill our essence with such elegant simplicity. We want to deconstruct every line for deeper meaning, but there is no need. What Keith Greeninger brings to music, and life for that matter, is authenticity. As a result, there are no barriers between Keith, his music and his audience. This bond stems from Keith’s underlying philosophy that music is first and foremost a gift and a medicine to take part in together.

As a singer-songwriter, Keith paints intricate portraits of the human condition with powerful melodic images, deep engaging guitar rhythms and husky, heart-wrenching vocals. His masterfully crafted tunes and powerful presence have earned him the top songwriting awards at the prestigious Telluride Blue Grass Festival, The Kerrville Folk Festival and The Napa Valley Folk Festival. Keith has toured the national Folk and Americana circuit extensively for over two decades. He’s performed at festivals and legendary venues, appeared on countless national radio shows, and shared stages with dozens of the country’s best-known artists. Keith’s records and personal appearances have garnered him a legion of devoted fans, and the respect, admiration and appreciation of music critics far and wide.

​David Jacobs-Strain is a fierce slide guitar player who channels the musical spirit of the Mississippi Delta, and hand-hewn stories of his home in Oregon. At ten years old he was busking on the streets of Eugene and Seattle, by nineteen he was playing at the New Port Folk Festival and opening for Etta James, and at twenty-one he dropped out of Stanford to play music full time. "As I go further into music the path seems to change. When I first started playing I wanted to capture the feeling of the Delta blues. Now I want to tell stories;  the sound and rhythm of the slide guitar are a vehicle for the characters in my head." In "Hurricane Railroad," Jacobs-Strain sets a scene on the fringes of Oregon: "There's a tar-paper shack at the edge of the clear-cut/ blackberry vines for a front yard/ living out on power line road/ drinking rainforest water out of mason jars." The mood is rugged but playful, the 12string-guitar groove sits somewhere between Leo Kotke and Little Feat, and the blues is a way of feeling, as much as a scale or a style.