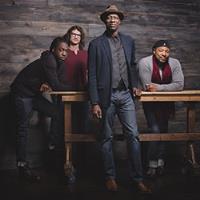 Three-time Grammy winner and visionary roots-music storyteller Keb’ Mo’ embarks on a new chapter in his career with the April 22 release of BLUESAmericana on Kind of Blue Music. His twelfth full-length album marks the 20th anniversary of his debut Keb’ Mo’, but, more important, the disc is a signpost of artistic and personal growth.

At its core, the album is about love and understanding. Those qualities are expressed in some of the most poignant and joyfully melodic numbers Keb has ever recorded. Many of them, including the pledge of commitment “Do It Right” and the reflective “For Better Or Worse,” assay devotion and marriage. The thorny, comic “The Worst is Yet To Come” is about hope, despite the hilarious laundry list of pitfalls its protagonist endures as he searches for a silver lining. And “Somebody Hurt You” is, in Keb’s words, “where the blues meets the church.” That number features Rip Patton, a longtime friend and Civil Rights era Freedom Rider, on beatific bass vocals. “My first intention was to make a stripped-down acoustic album — just me and my guitar playing some songs. But” — Keb laughs — “I couldn’t do it! I love ensembles so much.”