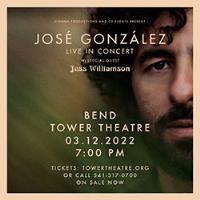 The Tower will offers complimentary masks. We recommend high-risk individuals wear them, including those:

It’s easy to overlook the fact that, despite only three solo albums in 18 years, José González has packed out distinguished venues from Sydney to Tallinn – via Berlin, Barcelona and Rio De Janeiro – and even sold out London’s prestigious, 4000+ capacity Royal Albert Hall.  He’s earned platinum records in the UK and his Swedish homeland as well gold in Australia and New Zealand. He’s also got some billion streams under his belt, and recent bewildering events have only endeared him further to the public, with his songs providing a consistent source of comfort over the last 18 months, something reflected by a significant rise in those streaming figures.


José’s long-awaited fourth album, Local Valley, provides a welcome reminder of his understated appeal and his singular ability to communicate discreetly, a quality illustrated by the uncommonly effective use of his music during The Last Dance, Netflix’s recent documentary about Michael Jordan.

Jose is well placed to delve into complex themes: when not making music or taking care of his daughter, he’s busy investigating topics like effective altruism, secular humanism and ecomodernism, upon which he can sometimes be found expounding amid a likeminded community on Twitter. In fact, he’s often been ahead of the game, musically and sociologically: he studied viruses at Gothenburg University, and his lyrics have frequently addressed previously marginalised themes like the struggle between ‘fake news’ and science, secularism and the environment.


Four albums in, Local Valley finds him – in the words of ‘Visions’ – “Imagining the worlds that could be / Shaping a mosaic of fates / For all sentient beings.” Few people would – or could – slip such a bold claim into a song so soberly and nimbly, but then again, few people have managed to become quite so celebrated worldwide quite as quietly as José has. What a relief it is to be reminded that you don’t have to be loud to be heard.