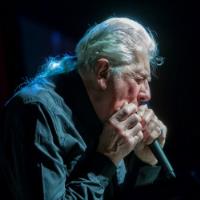 For over 50 years, John Mayall has served as a pioneer of blues music, rightly earning him the title, "The Godfather of British Blues." In 2013, John signed with producer Eric Corne's label, Forty Below Records, and has since been experiencing a true artistic and career renaissance.

This revival continues with the release of a brilliant new studio album titled "Find a Way to Care," produced by John and Eric at famed House of Blues Studios in Encino, California. About the new album, Corne says, "I really wanted to feature John's keyboard playing on this record. He's truly one of the most lyrical, economical and underrated keyboardists around. We also wanted to change things up a bit after the success of "A Special Life" and the addition of a horn section on several tracks was a really fun way to do that. As good as the last album was, I think this one is even better."

On the new album, John adds harmonica on two songs, as well as a classic guitar track reminiscent of Hubert Sumlin or Muddy Waters on the latter's legendary "Long Distance Call." He is joined by his killer touring band: Rocky Athas (guitar), Greg Rzab (bass) and Jay Davenport (drums). The release of "Find a Way to Care" comes on the heels of Mayall's internationally-acclaimed, "A Special Life" in released in 2014. "I'd easily put this one among Mayall's best efforts - and that includes 'Bluesbreakers with Eric Clapton,' 'A Hard Road' and 'Blues from Laurel Canyon!'" (about.com)

Earlier this year, John and Forty Below thrilled the blues world with the release of the historical Bluesbreakers album, "Live In 1967," featuring the three original members of Fleetwood Mac, Peter Green, John McVie and Mick Fleetwood. "Sunken treasure doesn't get much better" (Classic Rock Magazine). A second set is slated for a 2016 release.