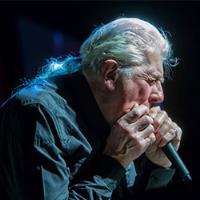 As 2013 came to a close, and with his 80th birthday mere weeks away, the godfather of British blues quietly entered a North Hollywood Studio with his band, special guest C.J. Chenier and co-producer/engineer Eric Corne. He walked out with one of the finest and most personal records of his career, A Special Life.

John Mayall was born on the 29th of November 1933 and grew up in a village not too far from Manchester, England. It was here as a teenager that he first became attracted to the jazz and blues 78s in his father's record collection. Initially it was all about guitarists such as Eddie Lang, Lonnie Johnson, Brownie McGhee, Josh White and Leadbelly. However once he heard the sounds of boogie woogie piano giants Albert Ammons, Pete Johnson and Meade Lux Lewis, his desire to play in that style was all he could think of. At the age of 14 when he went to Manchester's Junior School of Art, he had access to a piano for the first time and he began to learn the basics of this exciting music. He also found time to continue learning the guitar and a couple of years later, the harmonica, inspired by Sonny Terry, Sonny Boy Williamson and Little Walter.  READ MORE