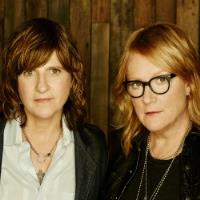 The Indigo Girls (Emily Saliers and Amy Ray) released their sixteenth studio album, One Lost Day, on June 2nd. Vast in its reach, but unified by the traveler’s sense of wonder, gratitude, and empathy, One Lost Day moves like a centrifuge, pulling the listener close to linger in the small moment, then casting out onto sonic currents. This is music of the past, present, and future — a boundlessness earned and not bestowed. One Lost Day has a feeling of music composed across time, not just in time. These songs are rooted in tradition and inventive, too: nourished in dark soils, leafing and luminous.

Memories here are more than specters; they are evolutions. The album maps the dim corridors of the heart and mind, lifting and landing the listener across state lines and continents. Place is a character rich in the universal specific: “Boots on a board in a barn” in “Texas Was Clean,” boys “under the bridge on the river shoals off GA 9″ in “Fishtails,” the New Orleans’ 1788 fire and the fence around the St. Louis cemetery in “Elizabeth,” the “sunny twist of Venice Chez Jay” in “Southern California is Your Girlfriend,” and the devil-spawned Angola prison in Louisiana where three black men sat wrongly convicted for decades, confined in solitary.

The Indigo Girls have spent thirty-five years performing together, produced fifteen albums (seven gold, four platinum, and one double platinum), earned a Grammy and seven Grammy nominations, and have toured arenas, festivals, and clubs the world over. It is rare to find musicians together so long, rarer still with such profound successes. Their music lives in the hearts of generations of dedicated fans and continues to inspire young musicians. This loyalty is not accidental. Perhaps their relevance over three decades can be credited to the mighty collisions of distinct aesthetics forging new paths over time. The Girls’ refinement — not only of style and skill, but of their own creative processes — allows access to ever new and liminal spaces.

A long creative marriage fosters its own scrappy beauty, though, and theirs grows more nuanced, weatherworn, and lovely in each successive album. Saliers and Ray live separate lives, take on independent projects, but share “the same set of values,” says Saliers. “We both embrace the struggle, share the same energy. We are sisters in our embrace of life. Observers.” That sort of artistic kinship is rare and cosmic. Here, then, are the stars of that labor, the next chapter.

Opening for the Indigo Girls is Lucy Wainwright. She has been compared to Joni Mitchell and Patti Griffin by NPR –

– was born in NYC into an influential musical family. Since 2007, Lucy has released two EPs and a studio album entitled Lucy (2010), toured the U.S., Canada and Europe, and has performed with a number of musicians including the Indigo Girls, Neko Case, and Over the Rhine. Lucy is known for her crystal clear voice and straightforward, funny stage presence.