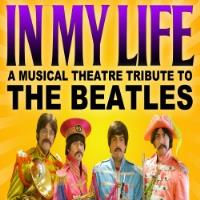 The award-winning musical retelling of the Beatles story through the eyes of manager Brian Epstein, and featuring the live music of one of the world's best tribute bands, Abbey Road.

The music of the Beatles -- John Lennon, Paul McCartney, George Harrison and Ringo Starr -- continues to stand the test of time. "In My Life - A Musical Theatre Tribute to the Beatles" will give you a fresh perspective on the band's history. It's more than a tribute concert; the show has a narrative element that depicts everything from the famed "Ed Sullivan Show" appearance to the final performance atop the Apple Corps offices. You'll see the Fab Four through the eyes of their late manager, Brian Epstein, who serves as narrator to renowned Beatles tribute band Abbey Road as they perform 33 of the group's classic hits. "In My Life" performed to a sold out show at Tower Theatre in 2014 and Abbey Road's "Beatles vs. Stones" played to a sold out crowd last year.