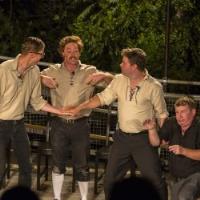 The Improvised Shakespeare Company, has been performing its critically-acclaimed show to sold out audiences in Chicago since 2005.  The ISC also continues to entertain audiences across the US with its national touring company.  They have been featured at the Piccolo Spoleto Fringe Festival, Off Broadway in New York City, Bonnaroo, the Bumbershoot Music and Arts Festival, Outside Lands, San Francisco Sketchfest, UCB’s Del Close Marathon, and the prestigious Just For Laughs festival in Montreal and Chicago.  The ISC has been named Chicago's best improv group by both the Chicago Reader and the Chicago Examiner and has received numerous awards in LA (Best of LA-LA Weekly), New York (New York Nightlife Awards), and Chicago (The Chicago Improv Foundation).