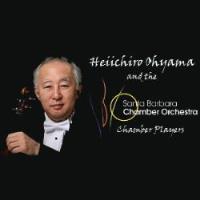 This best selling evening includes a complimentary rose for concert-goers and a custom treat from Goody's Chocolates!  Join Heiichiro and the Chamber Players for a pre-concert talk about the program beginning at 7:15pm.  This event is free for all ticket holders.

In 1983, acclaimed violist/conductor Heiichiro Ohyama took over as Music Director and his conducting and programming gifts have led the SBCO to be known among many as the best artistic organization in Santa Barbara.

The Chamber Orchestra series offers the community musically engaging experiences, hosting a number of world-renowned soloists over the years.  The secondary Chamber Players series features Maestro Ohyama performing as violist with members of the Santa Barbara Chamber Orchestra, as well as guest artists.

In 1974, he won the prize at the Young Concert Artists International Auditions in New York and was a participant of the Marlboro Chamber Music Festival in Vermont for several summers.  Mr. Ohyama was Principal Violist of the Los Angeles Philharmonic for 13 years.  In 1987, he was appointed Assistant Conductor of the Los Angeles Philharmonic by Andre Previn.  He was also Artistic Director of SummerFest in La Jolla from 1986-1997 and Artistic Director of the Sante Fe Chamber Music Festival from 1991-1997.

Mr. Ohyama was the Principal Chief Conductor of Kyushu Symphony Orchestra in Fukuoka, Japan from 1999-2004, the Osaka Symphony Orchestra from 2004-2008, and Music Director of Nagasaki Music Festival from 2007-2009.  In 2005, he received the "Fukuoka City Cultural Prize" and in 2008, "Outstanding Performance Award" from the Japanese Government.  In 2014, he was recognized for his artistic contribution by the City of Santa Barbara, California.

Violinist Sooah Kim was born in Seoul, Korea and began studying violin at the age of six.  A graduate of the Seoul National University College of Music, Ms. Kim also holds an Artist Diploma on full scholarship at the Colburn Conservatory of Music under the guidance of Robert Lipsett.

Currently a chamber musician, teacher, and orchestral musician in Los Angeles, cellist Paula Fehrenbach began her musical life in the public schools of Green Bay, Wisconsin, and received her first formal training in cello upon her acceptance to the Peabody Conservatory.  After degrees from Peabody with Yehuda Hanani and Miami University in Oxford, Ohio with Steven Shumway, she was chosen by Lynn Harrell to join his first class at the University of Southern California where she received her Doctorate in 1992.  She then spent three years in the New World Symphony under the direction of Michael Tilson-Thomas before returning to Southern California where she now pursues a varied career as artist and teacher.  She performs regularly with many orchestras including the Santa Barbara Symphony, the New West Symphony, Hollywood Bowl Orchestra, and the Santa Barbara Chamber Orchestra.  In addition, Ms. Fehrenbach is a member of the Central4 Piano Quartet, and has also performed in several musical theatre productions including the Lion King, Wicked West Side Story and the Addams Family.  She is currently on the faculty of Pasadena City College and Long Beach City College.

Akina Motoyama, born in Nagasaki, Japan, first started to play the piano at the age of 4 with her mother.  Following studies with Yukiko Kawaguchi, she went on to study at the Toho Gakuen School of Music in Tokyo with Makiko Yamasaki.  She has worked with a number of esteemed teachers including Aldo Ciccolini, Daniel Shapiro, Etsuko Tasaki, Haruko Ueda, John Perry, Klaus Hellwig, Kou Iwasaki, Nina Lelchuk, Peter Takacs, and Shigeo Neriki.