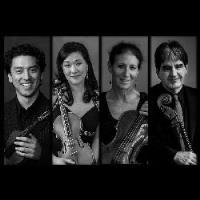 Their performances have been praised as "sublime" and "simply moving and spectacular". Based in the Crown City' Pasadena, California, the group is regularly featured at a number of chamber music series in Southern California and the Pacific Northwest.

The season finale features Central Oregon favorites the Crown City String Quartet.  Their performances have been praised as "sublime" and "simply moving and spectacular".  Based in the Crown City' Pasadena, California, the group is regularly featured at a number of chamber music series in Southern California and the Pacific Northwest.  This season they will be joined by a few special guests to perform the Brahms String Sextet.  This is your last chance to come hear the music!

This evening is brought to you by Lumbermens Insurance.  Join members of CCSQ for a pre-concert talk about the program beginning at 6:45pm.  This event is free for all ticket holders.

Based in the Crown City; Pasadena, California, the members have worked together in the Motion Picture and TV recording studios and are current and former members and principal players of some of Southern California's most renowned music organizations, including the Los Angeles Chamber Orchestra, Hollywood Bowl Orchestra, Pasadena Symphony, Los Angeles Opera Orchestra, and the San Diego Symphony and San Diego Chamber Orchestra.  They are regularly featured in a number of concert series in Southern California and the Pacific Northwest.

A recent review described the group's performance as "rich, smoky, heavy with nostalgia.  Its textures were rendered with limpid gracefulness...felt old-fashioned in the best way: genuinely and unapologetically Romantic in the best of the Central European tradition." (Ted Esteban Ayala Villaroel, Culture Spot LA) The group is dedicated to Educational Outreach efforts, and regularly conducts performances and Q&A sessions at a number of locations.

The group has also contributed to instructing and mentoring the Spotlight Chamber Players, a HDCM Educational Outreach program. With a refreshing and unmistakable camaraderie that is present both on and off-stage, the group is recognized for delivering dynamic and engaging performances of standard repertoire.  The group's 2014-15 season includes appearances in the South Pasadena Restoration Concert series, the Baxter Memorial Series, Camerata Musica in Salem, OR and the High Desert Chamber Music Concert series and Music & Friends series in Bend, OR.  Click here to visit the CCSQ website.

A recent performance "allowed Kumar to demonstrate that, in addition to making an utterly beautiful sound, he is a born leader, and the performance responded to every last facet of a work gigantic in stature." (Bernard Jacobson, Music-Web International)  Also praised by press for his "obvious communicative powers", "sense of sheer enjoyment", and having "the precision and tonal richness of a virtuoso", violinist Kevin Kumar has appeared as soloist with the Los Angeles Philharmonic, among numerous other orchestras.  Kumar has also been active as an orchestral player, serving as Concertmaster of the Schleswig-Holstein Festival Orchestra under Valeri Gergiev and Semyon Bychkov in tours throughout major European cultural centers.  He was personally invited by Sir Georg Solti to participate in the Solti Project at Carnegie Hall.

Violist Carrie Holzman-Little received a Bachelor of Arts from the University of California, Santa Barbara.  Primary instructors include William Primrose, Heiichiro Ohyama, Ron Copes, and Louis Kievman.  She was invited to attend the Tanglewood Music Festival under the baton of Leonard Bernstein, the Blossom Music Festival under the umbrella of the Cleveland Orchestra and the Music Academy of the West under the direction of Maurice Abravanel.

Cellist Dane Little is a native of Washington State, where he earned a Bachelor of Music from Washington State University.  After studies with Stephen Kates in Baltimore and Claus Adam in Aspen, Mr. Little came to Los Angeles to study with Robert Martin at California Institute of the Arts, where he earned a Masters of Fine Arts.  As a busy and sought after performer in prominent Los Angeles based organizations, he holds the position of Assistant Principal Cello in the Pasadena Symphony and a member of the Los Angeles Opera Orchestra, in addition to working in the Motion Picture and TV studios.  He has spent the past twenty years as a member of the Oregon Bach Festival in Eugene, Oregon under the direction of Helmuth Rilling.  Also an avid chamber musician, Mr. Little and his wife, Carrie, are both members of the Crown City String Quartet.  He is also a member of the Mountain Trio, a group he formed with pianist and sibling, Lorna Eder.