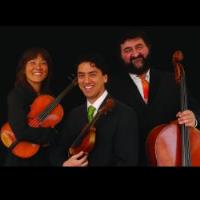 Catgut Trio has won over audiences with its inspired and moving musicianship, unusual communicative abilities, and innovative and attractive programming.

Opening night of the 2015-16 Season features a return of the popular Catgut Trio.  This Los Angeles based group is comprised of principal players of some of Southern California's most renowned performing organizations.  The group has won over audiences with its inspired and moving musicianship, unusual communicative abilities and innovative and attractive programming.  It's time to come hear the music!

Join members of the Catgut Trio for a pre-concert talk about the program beginning at 6:45pm.  This event is free for all ticket holders.

This dynamic ensemble is dedicated to exploring both known and unknown masterpieces in the genre, from works composed during the Renaissance to the present day.  The members of the trio have individually performed on prestigious international stages with some of the most celebrated musicians in recent times; the members hold title positions with world-renowned orchestras including the Los Angeles Philharmonic and the Los Angeles Chamber Orchestra.  They have come together from different paths to achieve a unique and distinctive musical synthesis from their rare and sensitive rapport.  In addition to performing at a number of venues in the greater Los Angeles area, they host their own series in Santa Monica, Catgut Mondays.

A recent performance "allowed Kumar to demonstrate that, in addition to making an utterly beautiful sound, he is a born leader, and the performance responded to every last facet of a work gigantic in stature." (Bernard Jacobson, Music-Web International)  Also praised by press for his "obvious communicative powers", "sense of sheer enjoyment", and having "the precision and tonal richness of a virtuoso", violinist Kevin Kumar has appeared as soloist with the Los Angeles Philharmonic, among numerous other orchestras.  Kumar has also been active as an orchestral player, serving as Concertmaster of the Schleswig-Holstein Festival Orchestra under Valeri Gergiev and Semyon Bychkov in tours throughout major European cultural centers.  He was personally invited by Sir Georg Solti to participate in the Solti Project at Carnegie Hall.

Dale Hikawa Silverman studied violin from the age of thirteen.  In 1974, she earned her Bachelor of Music degree in violin from the Chicago Musical College of Roosevelt University under the tutelage of Morris Gomberg.  She received a Master's degree from the University of Southern California in 1977.  She went on to play in the violin section of the St. Louis Symphony for the next two years, followed by being hired as a violinist in the Los Angeles Philharmonic by Carlo Maria Giulini in 1979.  After switching to the viola, she has held the position of Associate Principal violist since 1985.

Cellist Armen Ksajikian began his professional career at the age of twelve with the National Philharmonic of Abkhazia in the former Soviet Union. Since his arrival in the United States in 1976, he has established himself as a vital contributor to nearly every aspect of the musical life of Los Angeles.  Ksajikian has performed as principal, soloist, or member of most music organizations in the Southland.  He has toured with the Los Angeles Philharmonic to New York and Europe, and with the Hollywood Bowl Orchestra to Japan and Brazil.​