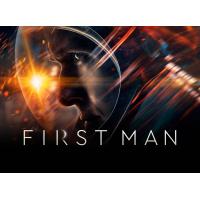 50th Anniversary of the Apollo 11 Moon Landing
Please Note: we will begin the screening of these films promptly at 7:55pm

First Man is a 2018 biographical film directed by Damien Chazelle (La La Land) and executive produced by Steve Spielberg.  Based on the book First Man: The Life of Neil A. Armstrong by James R. Hansen, the drama stars Ryan Gosling as Armstrong, alongside Claire Foy, Kyle Chandler and Lukas Haas. It follows the years leading up to the July 1969 Apollo 11 mission to the Moon.

First Man had its world premiere at the Venice Film Festival, receiving critical praise regarding the direction, Gosling and Foy's performances, musical score, and the Moon landing sequence. However, the choice to not depict Armstrong planting the American flag on the lunar surface led critics and politicians from both political parties to debate the film's patriotism.

Chazelle stated: "I show the American flag standing on the lunar surface, but the flag being physically planted into the surface is one of several moments I chose not to focus upon. To address the question of whether this was a political statement, the answer is no. My goal with this movie was to share with audiences the unseen, unknown aspects of America's mission to the Moon."

The film, although considered a commercial disappointment, won Best Original Score and a nomination for Best Supporting Actress (for Foy) at the 76th Golden Globe Awards. It won the Oscar for Best Visual Effects and was nominated for Best Sound Mixing, Sound Editing, and Production Design at the 91st Academy Awards.

Chazelle and cinematographer Linus Sandgren chose to shoot the film in three different formats: 16mm, 35mm, and IMAX 70mm film for the Moon sequence. The 16mm format was used in most scenes inside the spacecraft, with 35mm film used for scenes in the Armstrong house and around the NASA facility.

First Man was shot without the use of green screen. Instead, LED displays projected images simulating the space and Earth outside the spacecraft. The spacecrafts were synchronized to move with the images of the LED screens seen through the windows. Instead of the actors seeing a blank green screen, they saw the “real” outside environment recreated with visual effects.

The lunar surface was recreated in a rock quarry in Atlanta. To simulate the low gravity on the lunar surface, a balancing system calibrated for the actors was constructed. NASA historian Christian Gelzer plus astronauts Al Bean and Al Worden were on set as technical consultants.

The musical score for First Man was performed by a 94-piece orchestra. It also features the theremin, an electronic instrument with two antennas that sense the position of the performer’s hands: one controls oscillators for frequency; the other for  amplitude (volume). The electric signals are amplified, resulting in “eerie” musical tones (theremin-like notes were used in the Beach Boy’s iconic song “Good Vibrations”).

Chazelle liked the theremin's association with low-budget sci-fi pictures of the '50s and early '60s, as Armstrong and his NASA colleagues race to the Moon was "basically doing real-life science fiction," Chazelle said. "Those were the sounds and images we had in our minds of the moon, and space in general. At its heart," continues Chazelle, "this was a story about grief, about someone who lost a lot of people he loved, and what those losses did to him. There was something about the theremin that seemed to convey that grief that spanned across the cosmos. It obviously makes you think of space, but it also has those qualities of the human voice – a sort of wailing – that feel very mournful to me."

ABOUT A TRIP TO THE MOON
Unrated; 18 minutes
A Trip to the Moon (Le Voyage dans la Lune) is a 1902 French adventure film directed by Georges Méliès and inspired by Jules Verne's novels. The film follows a group of astronomers who travel to the Moon in a cannon-propelled capsule, explore the Moon's surface, escape from an underground group of Selenites (lunar inhabitants named for the Greek moon goddess Selene), and return to Earth with a captive Selenite. It features an ensemble of French theatrical performers, led by Méliès himself in the main role of Professor Barbenfouillis. It is filmed in the overtly theatrical style for which Méliès became famous.

The film, an internationally popular success on its release, was extensively pirated in the United States. Its lavish production values, innovative special effects, and emphasis on storytelling were markedly influential on other filmmakers and ultimately on the entire development of narrative film.

A Trip to the Moon is widely regarded as the earliest example of the science fiction film genre and one of the most influential films in cinema history. It was named one of the 100 greatest films of the 20th century by The Village Voice. 1001 Movies You Must See Before You Die places A Trip to the Moon as the first entry, arguing it "directly reflects the histrionic personality of its director" and it "deserves a legitimate place among the milestones in world cinema history." The moment when the capsule lands in the Moon's eye remains one of the most iconic and frequently referenced images in the history of cinema.

According to Méliès's recollections, much of the unusually high cost of A Trip to the Moon was due to mechanically operated scenery and the Selenite costumes. Méliès himself sculpted prototypes for the heads, feet, and kneecap pieces in terra cotta, and then created plaster molds. A specialist in mask-making used these molds to produce cardboard versions for the actors to wear. One detail of note: the backdrop of the inside of the glass-roofed workshop where the space capsule is built was painted to look like the actual glass-roofed studio where the film was produced.

Though Méliès's films were silent, they were not intended to be seen silently. Exhibitors often used a narrator to explain the story unfolding onscreen, accompanied by sound effects and live music. Méliès took considerable interest in musical accompaniment for his films, and prepared special film scores for several of them. However, Méliès never required a specific musical score to be used with any film, allowing exhibitors freedom to choose whatever accompaniment they felt most suitable.

In that spirit, the Tower Foundation commissioned Christopher Kuter to create and provide original keyboard accompaniment for tonight’s screening of A Trip to the Moon. Born to travelling circus performers, Christopher learned to play the squeezebox at the tender age of three, giving him his first taste of melodic mastery (even though his fingers couldn’t reach all the buttons). Under his parent’s tutelage, and in front of the circus crowds, Christopher honed his musical craft across a wide array of instruments. The fall in popularity of travelling circuses forced Christopher to find alternate ways to make a living. A chance encounter with [NAME REDACTED] led him to work for the CIA as an undercover overseas operative. Although most of his endeavors were kept off the record, he did receive an accommodation from the British Royal Family for thwarting a blackmail attempt in 2012, resulting in the safe recovery and return of the Queen’s beloved Corgis. Christopher has lived in Bend, Oregon since 2016 with his partner, Emily, and their pug, Minkah Bah, going on adventures. He still plays music. He still sells tickets in Tower Theatre’s Box Office.

A Trip to the Moon preceded the development of narrative film editing by pioneers such as D. W. Griffith and does not use the now-expected cinematic structure of varied camera angles, intercutting, juxtapositions of shots, and other filmic techniques. Rather, in a design to fit the theatrical style of the production, each camera setup records a distinct dramatic scene uninterrupted by visible editing,.

Film scholars have noted the most famous moment in A Trip to the Moon plays with temporal continuity by showing an event twice: first the capsule is shown suddenly appearing in the eye of an anthropomorphic moon; then, in a much closer shot, the landing occurs very differently, and more realistically, with the capsule plummeting into believable lunar terrain. This kind of nonlinear storytelling—where time and space are treated as repeatable and flexible—is highly unconventional by the standards of Griffith and his followers. In the 20th century, however, our familiarity with sports’ instant replays made temporal repetition a widely accepted device.

The first decade of filmmakers used a presentational style based on spectacle to tell the story, rather than relying on intricate editing. Though the “attraction style” of filmmaking declined in popularity, it remains an important component of science fiction, musicals and avant-garde films.

A Short History of Film notes, A Trip to the Moon combined "spectacle, sensation, and technical wizardry to create a cosmic fantasy that was an international sensation." In addition, Méliès's innovative editing and special effects techniques were widely imitated. The film spurred the development of cinematic science fiction and fantasy, demonstrating that scientific themes worked on the screen and that reality could be transformed by the camera. D. W. Griffith said simply of Méliès: "I owe him everything."