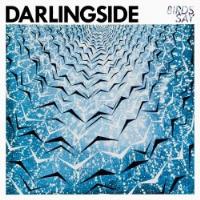 Sisters Folk Festival Presents the Americana and bluegrass infused harmonies of Darlingside with Frances Luke Accord.

“Pesticide is used to kill pests. Fratricide is when you kill your brother,” explains Darlingside’s Dave Senft. “A former teacher of ours used to say ‘kill your darlings,’ which is to say, if you fall in love with something you’ve written you should cross it out. We like that idea and we thought a good name for it might be ‘darlingcide’, but we changed the ‘c’ to an ‘s’ because we’re not super into death.” The naming of the band reflects the arch humor, cryptic wordplay, and playful banter that the four close friends share on and off stage—but the music Darlingside plays is serious, cinematic, and deeply moving.

On Birds Say, the Massachusetts-based quartet’s wide-open arrangements are marked by the skillful vocal interplay of the four singers. When bassist Dave Senft, guitarist and banjo player Don Mitchell, classical violinist and folk mandolinist Auyon Mukharji, and cellist and guitar picker Harris Paseltiner gather around a single microphone and let their richly-textured voices loose, they splash their melodies with a sunny melancholy that brings their lyrics to vibrant life. Subtle musical shadings take cues from 60s folk, chamber pop, bluegrass, classical music, and modern indie rock, while aching harmonies are complemented by tones from the harmonium, frailing banjo, 12-string electric guitar, Wurlitzer, auto-chord organ, and grand piano. The result is a collection of quietly passionate songs that defy easy categorization.

“Each song and set of lyrics are created by all of us together, a sort of ‘group stream-of-
consciousness,’” Harris says. “So we moved away from a single lead vocalist and started gravitating towards singing in unison, passing the melody around, or harmonizing in four parts through an entire song.” Live and on record, they present a unified voice by clustering around a single condenser microphone and blending their voices in the room before they hit the mic.

"While Simon & Garfunkel may be no longer touring, Powers and Gunty are more than talented enough to take their place." -Quinn Delaney, PlaylistHQ​