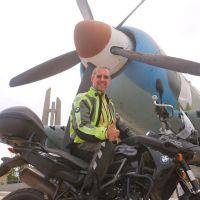 National Geographic photographer and expedition leader Christopher Baker takes his audience on a journey through this Caribbean island-nation of socialism and sensuality.

Describing a time-warp setting of which Hollywood can only dream, Baker weaves a fascinating picture of a country undergoing rapid change.

Christopher Baker has visited Cuba more than seventy times and is intimately familiar with the island’s culture, society, history, politics and economics.  He has met Fidel Castro and other cultural and political leaders of Cuba.  In addition to six guidebooks, his literary travelogue, Mi Moto Fidel: Motorcycling Through Castro’s Cuba, won both the Lowell Thomas Award as ‘Travel Book of the Year’ and the North American Travel Journalist Association Grand Prize.

His writing and photography have appeared in more than 200 international publications, from National Geographic to Newsweek, and he has appeared on numerous TV and radio shows, including NBC, ABC, Fox, CNN and PBS.  He frequently leads trips to Cuba through National Geographic Expeditions. In 2008, he was awarded the Lowell Thomas Award 'Travel Journalist of the Year’

Generous sponsorship from the University of Oregon School of Journalism and Communication, and organized by the Nancy R. Chandler Visiting Scholar Program of Central Oregon Community College Foundation.