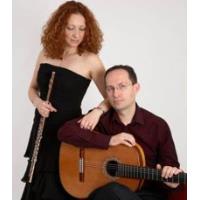 Cavatina Duo has captivated audiences with their electrifying performances in such major venues and festivals as Ravinia (Chicago), Da Camera Society (Los Angeles), Aix-en-Provence Summer Festival (France), Symphony Center Chicago, the National Concert Hall of Taipei (Taiwan), National Center for the Performing Arts in Beijing, China, National Flute convention Gala Concert, USA, among many others. Composers from around the world have been inspired to write and arrange new works for the duo. They received the Encore Prize in 2003.

In February 2010 Cavatina duo premiered the Concerto for Flute Guitar and Orchestra dedicated to them by US born composer Alan Thomas with Camerata Serbica in Belgrade.  Since then they have performed with orchestras in Europe, USA and Mexico; Chicago Sinfonietta, Traverse Symphony, Sarajevo Philharmonic and the Monterrey Orchestra.
The Cavatina Duo has recorded five Cd’s for Spanish and North American labels; Opera Tres, Cedille, Bridge and Orobroy Records.

Omaha Guitar Trio, opening for the evening, was founded at the University of Nebraska at Omaha while studying classical guitar.performance and education. They perform their own rendition's of popular music, originals, and play in a variety of contemporary styles, including classical, flamenco and jazz, throughout Omaha and Lincoln. OGT is also proud and dedicated teachers, educating privately and at music shops. They have given master classes and performances at schools and give concerts regularly.