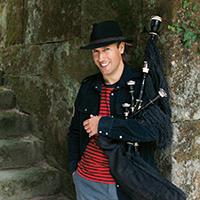 One of the biggest artists in the international World / Celtic Music scene, having the quality of a classical music virtuoso and the charisma of a rock star.

Carlos Núñez comes from Galicia, the Celtic region in the North West of Spain. He is considered one of the biggest artists in the international World / Celtic Music scene, having the quality of a classical music virtuoso and the charisma of a rock star. Carlos has expanded the borders of Celtic music to Flamenco, Fado, Cuban, Mexican, Brazilian or Classical music, Movie Soundtracks, Contemporary Dance... As he describes it, he plays Celtic music with Latin passion.

SONY MUSIC (formerly BMG) have released his 10 albums to date, that have sold 1 million copies since his debut in 1996, accumulating several Platinum and Gold CDs and DVDs, as well as 2 Latin Grammy nominations. The album Santiago, for which he became honorary member of The Chieftains, got a Grammy in 1997. Carlos Núñez prepares now his comeback to the US, where he performed hundreds of shows in the early 90s, either with The Chieftains, or with his own band. Since his last US release and tour over 10 years ago, he has concentrated in Europe, Latin America and Japan, territories in which he is considered on the top of his genre, performing an average of 100 dates per year.

Fall 2012 marked the release of Discover, his a greatest-hits, double CD collection on SONY MASTERWORKS, and includes some of his collaborations with artists like The Chieftains, Jackson Browne, Ry Cooder, and many more. Its’ popularity brought Carlos’s long-awaited return to North America. Major touring ensued Fall 2012 through summer 2013 with new band line-up featuring his brother Xurxo on percussion, Pancho Alvarez on Brazilian viola, and fiddler/step-dancer Jon Pilatzke, whom he met while with The Chieftains.
"The Carlos Núñez Band, led by the charismatic Galician pipes and whistles star, was the toast of last year’s Celtic Connections, and returned this time in no less dynamic form... Individual and ensemble playing were a sheer delight big Pete Townsendish bouzouki licks, mellifluous Spanish guitar, saucy dancing fiddle, all dappled with the liquid sunshine of Núñez’s whistle, or the fiery pulse-quickening squeal of his pipes. No tricks, no safety net, just sheer bone-deep musicianship." _The Scotsman (UK)

"Overflowing with natural charm, Núñez has become quite the showman as well as the brilliant instrumentalist on just about every woodwind instrument you can imagine." _The Times (UK)

"Carlos is a scorching piper and flautist: his sound has a pristine quality which hones into the core of a melody’s emotion without any overplaying or sentiment. The band is tight and confident, setting a pace, blasting to the front of the stage en masse at high points. It’s quite wonderful and the public of all ages can’t get enough of it." _Froots