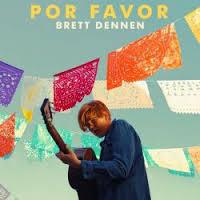 Tickets: $35 General Admission - seats will be removed down front for dancing

As common and simple as it is, “por favor” is such an evocative expression.
From Spanish, it translates to “please,” a word that suggests a need for something, a desire to make a change. “‘Por favor’ was something I kept saying every day in the studio, and I got the other musicians saying it,” says Brett Dennen. “We were goofing around, and Dave Cobb, my producer, said it should be the title of my new record. I laughed it off at first, but then I really thought about it.” “When you say please, you’re asking something to come into your life,” Dennen adds. “It might mean that you’re weak and need something to make you strong. But you’re admitting to some sort of weakness or some form of humility.”

That notion is at the heart of “Por Favor,” Dennen’s intimate and revealing new album that Elektra Records will release on May 20. Produced by Cobb, fresh from his Grammy winning work with Chris Stapleton and Jason Isbell, the record strips Dennen to his core as a songwriter with nothing to hide. “All these songs came from a time of sadness for lots of different reasons. They came at a point when I wasn’t feeling confident about myself,” he says. “When I’m not feeling confident, I’m not a nice person to be around. I don’t take care of my health, my relationships, my stuff, and it all cycles into a miserable place. And I have a really hard time admitting that I’m in that place.”

A followup to 2013’s “Smoke and Mirrors,” his sixth studio album dives deep into loneliness, loss, and love and all its side effects. It’s the sound of an artist working through his insecurities in song, and thereby letting go of them. But it’s by no means a sad affair, nor is it the “rainy-day record” Dennen initially thought he was making. Often framed by uplifting choruses and bright acoustic arrangements, these songs brim with optimism, the palpable sense that the tide is turning. “And I want to love you for the way you are/ Not the way I am/ So let’s go now/ Back to the bonfire where we began,” he sings over a chugging groove on “Bonfire.”