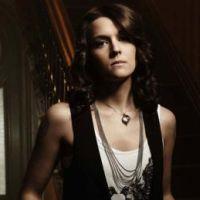 Brandi returns to the Tower for ONE NIGHT ONLY! - SOLD OUT

Opening Act will be Ivan & Alyosha.

After debuting with her self-titled album in 2005, the Washington State-bred Carlile saw her fanbase mushroom with her sophomore disc, The Story, in 2007. Among the growing legion of Carlile fans is Elton John. "Brandi has an amazing voice," he says. "She�s a great songwriter and has a tremendous career ahead of her." Proudly, Carlile says that John - who duets with her on the song, "Caroline" - played a key a role in her evolution as an artist: "I've been listening to country and western music my whole life and I was totally immersed in Grand Ole Opry culture, wherein the entertainers are usually not the ones who wrote the music. But when I was 11 and discovered Elton John, I realized that performers do write and perform their own songs, and I immediately went out and got a keyboard and started writing." When they recorded together, "I was just overwhelmed by the years, and by the influence that somebody can have on another person's life without even knowing it."

Brandi Carlile's third album, Give Up The Ghost, unveils her talents in their truest form. After two albums and non-stop touring, she has let her guard down and offers her most candid recording to date. If the phrase "give up the ghost" most often refers to death or dying, it can also be used to describe the passing of stages in life, of transformation.

"To give up the ghost is not just to die since we do it a handful of times throughout our lives. It's a sort of leaving yourself behind," she explains. "Or what you knew yourself to be so that you can grow and transcend love or youth. Sometimes both."

The recording of Give Up The Ghost offered new experiences including working with the likes of Elton John, Tom Petty and the Heartbreakers multi-instrumentalist Benmont Tench, drummer Chad Smith and Amy Ray of The Indigo Girls, all of whom contribute to the album.

For Carlile, the album is one of extremes: "The songs that are stripped down, raw and bare are that way so it makes the listener feel a little uncomfortable," she says. "And the ones that are huge are really big, with big harmonies, piano, layering electric guitar solos and a string arrangement like at the end of 'Pride and Joy.'"