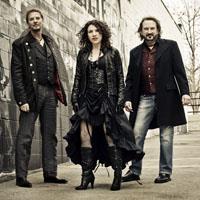 VIP tickets get an exclusive Meet and Greet with the Band

The creative spark that turned into Blue Sky Riders was struck as two veteran singer/songwriters worked on their first song together.

“The best part,” says Kenny Loggins of that meeting with Gary Burr as he wrote for “How About Now,” his well-received 2008 release, “was that when we sang together, we sounded like brothers. The last time I experienced that kind of blend was with Jimmy Messina in 1971.”

Loggins, one of the premiere voices in modern popular music, called Burr, one of Nashville’s most accomplished writers, afterward and asked if he’d like to form a band. Then he suggested they look for a third, female voice.

“I’ve got the perfect person,” said Burr. “Georgia Middleman. She’s the best I’ve ever worked with.” Loggins flew to Nashville and the three sat down to write.

“What a meeting!” says Loggins. “We wrote our first song and were singing with a three-part blend that comes once in a lifetime.”

With that, Blue Sky Riders was a reality.