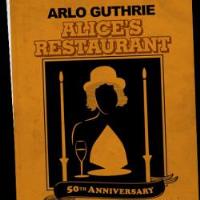 Folk music icon Arlo Guthrie is a legendary artist who shares timeless stories and unforgettable classic songs as he carries on the Guthrie family legacy. With his singular voice as both a singer-songwriter and social commentator, he has maintained a dedicated fan base that spans the globe. A celebrated figure in American music, Arlo connects with communities far and wide leaving a lasting impression of hope and inspiration. His artistic ventures help bridge an often-divided world through his powerful spirit of song, and his inimitable musical ingenuity forges to new creative heights as he continues to entertain generations. Arlo Guthrie left the major record label system in 1983 to pursue life as a truly independent artist, bringing his thriving career into the hands of a family-run business with the launch of his own label Rising Son Records. Currently operated by daughters Annie and Cathy Guthrie, Rising Son debuted with the release of Arlo’s Someday (1986). Since its inception, Rising Son has served as a family label housing Arlo’s complete catalogue as well as albums by Woody Guthrie and family, Pete Seeger & Arlo Guthrie, Sarah Lee Guthrie & Johnny Irion (Rt. 8 Records), Abe Guthrie and his band Xavier, Folk Uke (Cathy Guthrie and Amy Nelson, daughter of Willie Nelson), plus the soundtrack to Woody Guthrie Hard Travelin’. In Times Like These (2007), one of Rising Son's most recent releases, features Arlo alongside the University of Kentucky Symphony Orchestra. The album marks the culmination of his work with 27 different symphony orchestras and more than 40 live concerts. His show at Boston Symphony Hall, conducted by Keith Lockhart, was recorded and aired on PBS's Evening at the Pops. In 2001, the Fourth of July celebration with the Pops was broadcasted live by A&E. A compelling collection of original songs and select American classics performed by Arlo and the University of Kentucky Symphony Orchestra, In Times Like These was released on vinyl in the fall of 2009. In celebration of the 40th anniversary of Woodstock, Rising Son released Tales of ’69 (August 18, 2009). Recorded just prior to Woodstock, the recently discovered lost tape highlights Arlo live in concert in Long Island, NY and features nine tracks including an epic 28-minute talking blues tale as well as three previously unrecorded songs. Arlo's ambitions have always included various community projects in addition to his artistic pursuits. In 1991, he purchased the old Trinity Church near Stockbridge, MA, which is now home to The Guthrie Center, named for his parents, and The Guthrie Foundation. The Guthrie Center is a not-for-profit interfaith church foundation dedicated to providing a wide range of local and international services. The Guthrie Foundation is a separate not-for-profit educational organization that addresses issues such as the environment, health care, cultural preservation and educational exchange. In 2009, Arlo was awarded the ASCAP Foundation Champion award for making a difference through social action on behalf of worthwhile causes and demonstrating exceptional efforts in humanitarianism.