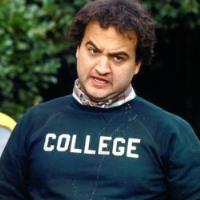 This summer marks the 40th anniversary of the release of National Lampoon's Animal House … and the Tower joins with FOX Sports Radio to throw a well-deserved party! Directed by John Landis and written by Harold Ramis, the “best comedy of all time” (Bravo, AFI, Library of Congress) stars John Belushi and Tim Matheson leading a misfit group of fraternity brothers who challenge the authority of the dean of Faber College.

Bend’s FOX Sports Radio personality BP will host the special screening, and award prizes in a pre-show toga and costume contest. Plus, take advantage of the "Delta House Special" -- $2 PBRS.


In 1978, Animal House received generally mixed reviews from critics, but Time and Roger Ebert proclaimed it one of the year's best. Filmed for only $2.8 million, it became one of the most profitable movies in history.

The president of the University of Oregon, William Beaty Boyd, had been a senior administrator at the University of California in Berkeley in when his campus was considered for a location for the 1967 film The Graduate. His senior administrative colleagues advised him to turn it down due to the lack of artistic merit. So the campus scenes were instead shot at USC in Los Angeles. After that film went on to achieve classic status, Boyd vowed not to make the same mistake twice. When the Animal House producers inquired about filming at Oregon, university officials thought the script—although raunchy and often tasteless—was a very funny spoof of college life. So Boyd said “yes,” and even allowed the filmmakers to use his office as Dean Wormer's.

The actual “Delta House” was originally a residence in Eugene, acquired by Phi Sigma Kappa fraternity until 1967. At the time of filming, the Phi Kappa Psi and Sigma Nu fraternity houses sat next to the old Phi Sigma Kappa house, and were used for many interior scenes. The film’s concluding parade scene was filmed on Main Street in downtown Cottage Grove, about twenty miles south of Eugene.

After four decades, this cinematic cult classic proves gross-out college humor is never finished. As Bluto put it: "Over? Did you say ‘over?’ Nothing is over until we decide it is!”