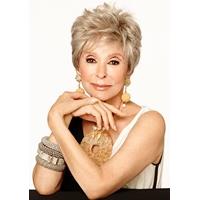 For pairing an evening of story with song, Rita Moreno is both master chef and sommelier.

If there ever was one singular show business sensation, it is iconic Oscar®-winning actress-singer-dancer Rita Moreno. She continues to wow audiences after more than six decades.
An internationally-acclaimed and honored performer, Ms. Moreno will provide an evening of song and story, and according to The Washington Post’s chief theatre critic, “She rocks!”

Rita Moreno​ invites you to the Tower

Ms. Moreno is both master chef and wine steward when it comes to pairing an evening of story and song. The table is set with a full course that includes some of her favorite songs from the American Songbook, Broadway classics, Swing, Jazz, selections from her new Spanish album and even rap! She will be accompanied by a trio under the direction of Russ Kassoff.

With her quick wit, deep insight and earthy candor, Ms. Moreno will also share fascinating experiences, anecdotes and encounters with some of show businesses’ biggest names. She does it all and has it all. She is one of only 12 living performers who have the distinct honor of winning all of the industry’s most prestigious awards:  The Oscar®, The Emmy®, The Tony® and The Grammy®.

Ms. Moreno won the Oscar for perhaps her best known role, the skirt-twirling Latina spitfire, Anita, in West Side Story; The Tony for her comedic Broadway triumph, The Ritz; The Grammy for her performance on The Electric Company Album, based on the long-running children’s television series in which she starred; and two Emmys for appearances on The Muppet Show and The Rockford Files.

An octogenarian, Ms. Moreno was born Rosita Dolores Alverio in a small Puerto Rican town. She moved to New York with her mother age five. She soon began dance lessons which led to her Broadway debut at 13.

Then, in true Hollywood tradition, a talent scout spotted her and arranged for the beautiful precocious teen to meet MGM mogul Louis B. Mayer, who signed her to a film contract. He described Ms. Moreno as looking like “a Spanish Elizabeth Taylor.”

From her early years in theater to the height of film, Broadway and television stardom, Ms. Moreno rose above the limitations of Hollywood typecasting and established herself as a versatile performer with virtually unlimited talent. She has starred on Broadway and London’s West End; appeared in more than 40 movies (including the aforementioned West Side Story, The King and I and Singin’ in the Rain) and countless television shows. She has performed in numerous regional theatres, most recently in her one woman show, Life Without Makeup, at the Berkeley (CA) Rep.

Now on a 29-city tour, Ms. Moreno is as active today as ever. She is starring in a remake of producer Norman Lear’s classic TV sitcom, One Day at a Time, premiering in January on Netflix. She is known to television viewers for her guest-starring roles in primetime series, including Getting On, Jane The Virgin, Happily Divorced, Grey’s Anatomy and Grace and Frankie. She is the voice of “Abuelita” in the new NBC-TV Sprout network’s animated TV series, Nina’s World.

Ms. Moreno was honored by The Kennedy Center for a lifetime of artistic achievement. Her status as a national treasure was previously recognized when President George W. Bush presented her with the Presidential Medal of Freedom. President Obama awarded her the American National Medal of the Arts for her lifetime of service and contributions to the arts.

Her dozens of other honors include receiving the Screen Actors Guild Life Achievement Award and the Latin Grammy Lifetime Achievement Award. She is most proud of being a trailblazer for Latinos in the entertainment industry.