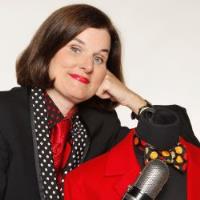 32 years ago Paula Poundstone climbed on a Greyhound bus and traveled across the country -- stopping in at open mic nights at comedy clubs as she went.  She went on to become one of our country’s foremost humorists. You can hear her through your laughter as a regular panelist on NPR’s #1 show, a rascal of a weekly news quiz show, Wait Wait…Don’t Tell Me.  This year she was part of the talented cast in Pixar’s critically acclaimed movie, INSIDE OUT, and she tours regularly, performing standup comedy across the country, causing Bob Zany with the Boston Globe to write: “Poundstone can regale an audience for several hours with her distinctive brand of wry, intelligent and witty comedy.”  Audience members may put it a little less elegantly:  “I peed my pants.”

Says, Peter Sagal, Host of NPR’s Wait Wait…Don’t Tell Me: “People love Paula Poundstone and they always have. The amazing thing about Paula is that she has an amazingly distinctive personality. You can see a lot of really, really great comedians, but you may walk away without a sense of who they really are…Paula comes out on stage and she starts talking about her life and then 20 minutes later you realize you're in the middle of her comedy act and didn't really know it.”

Poundstone’s ability to be spontaneous with a crowd is the stuff of legend.  Poundstone says:  “No two shows I do are the same. It's not that I don't repeat material. I do. My shows, when they're good, and I like to think they often are, are like a cocktail party. When you first get there, you talk about how badly you got lost and how hard it was to find parking. Then you tell a story about your kids or what you just saw on the news. You meet some new people and ask them about themselves.  Then, someone says, "Tell that story you used to tell," and then someone on the other side of the room spills a drink, and you mock them.  No one ever applauds me when I leave a party, though. I think they high five.”   Paula's interchanges with the audience are never mean or done at a person’s expense.

She even manages to handle politics without provoking the pall of disapproval less artful comics receive.

Off-stage Paula Poundstone excels too.  She’s filed commentary on CBS Sunday Morning, and editorial pieces for NPR's All Things Considered.  She has recorded two CD’s: I HEART JOKES: Paula Tells Them in Boston (2013), and I HEART JOKES: Paula Tells Them in Maine (2008).  An accomplished writer, with national magazine articles and a back-page column for Mother Jones magazine for several years, Paula’s first hard cover book, There is Nothing In This Book That I Meant To Say, with a forward by Mary Tyler Moore, was published in November, 2006, by Harmony Books, a division of Random House. It is still in release on audio (Highbridge) and in paperback.   Poundstone is also an avid reader and has been the American Library Association (ALA) National Spokesperson for United for Libraries since 2008.  United for Libraries is a grass roots organizations of volunteers who work to raise much needed funds to support their local libraries.

It has been said of Poundstone that she not only shot through the glass ceiling, she never acknowledged it was there.   She was never one to stereotype herself as a ‘female comedian’ or limit herself to comedy from a ‘female’ point of view. Over the span of her career, she has amassed a list of awards and accolades that include: The first woman to win the cable ACE Award for Best Standup Comedy Special (1992); The first woman to perform standup at the White House Correspondents dinner; (1993); .  She has starred in her own comedy specials on HBO and BRAVO.  In fact, “Paula Poundstone Goes to Harvard,” on HBO, was the only time the elite university has allowed their name to be used in the title of a television show. If it means anything to anyone, Paula is recognized as one of Comedy Central's 100 greatest stand-ups of all time.  She won an American Comedy Award for Best Female Standup Comic, and in 2010 she was one of a select group voted into the Comedy Hall of Fame.
Wait Wait…Don’t Tell Me is now the most popular show on NPR, having reached #1 status in 2014.  Follow Paula on twitter.com/paulapoundstone, facebook.com/PaulaPoundstone,
and enjoy her website: www.paulapoundstone.com