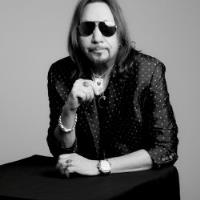 Like a shooting star headed toward earth from another solar system, Ace Frehley operates in his own musical galaxy. He’s a musical maverick and iconoclast adored by millions of fans around the world. Through his seminal work with KISS and as a solo artist, Ace Frehley is championed as one of the most influential guitar players of the last four decades and his impact on popular music is immeasurable. With his smash 1978 solo album and post­KISS work including 2009 Anomaly, Frehley continues to be the best selling member of the original band.

A career in music was in the cards for Ace from the very beginning. “I decided when I was sixteen years­ old that I wanted to be a professional musician,” Frehley asserts. “Not only did I decide that but I always felt that I was gonna make it. I’ve always had the power of foresight and I felt it was destiny for me. I knew it was gonna happen, if it wasn’t with KISS it would have happened with someone else. I distinctly remember seeing Led Zeppelin, Cream and The Who, all groups who I admired tremendously, but at the same time there was a little voice in the back of my head going, “You can do that too.”

Early on, Ace recognized the importance of fusing explosive musicality with “look at me ma” showmanship. “The Who was a big inspiration on me. The day I saw The Who play for the first time in 1967 at the RKO Theater changed my life. Seeing Pete Townshend made me realize playing live onstage wasn’t just about peeling off impressive licks but you have to entertain too. I knew then that I wanted to do something musical and theatrical. I remember playing in high school bands and lighting off smoke bombs (laughs). I painted day­glo flowers on my drummer’s drums and put a black light in front of the kit so it would glow. I put lights in a guitar when I was eighteen­years­old.”