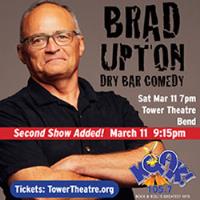 This is the ticketing page for the NEWLY ADDED 2nd show!!

After 36 years in the standup comedy business, the world has discovered Brad Upton. He is an internet sensation with over 200 million views of his Dry Bar Comedy specials.

Brad was teaching fourth grade and coaching high school track in Pasco, WA when he first stepped on stage in 1984. Two years later he quit teaching to dedicate himself to making people laugh, and he’s never looked back.

Brad has made several cable television appearances and has headlined comedy clubs from coast to coast and around the world, opening for big name musical acts and corporate events.  He won the Las Vegas Comedy Festival in 2002 and toured briefly with the late Joan Rivers.  Over the past 15 years he’s been the opening act for the legendary Johnny Mathis.  He has also appeared with The Smothers Brothers, Kenny Rogers, Dolly Parton, George Jones, Glen Campbell, Little Big Town, Smokey Robinson, Pam Tillis, Joe Diffie, Lewis Black and Jeff Foxworthy, among others.

His life changed in 2017 when he taped a special for a brand new comedy platform called Dry Bar Comedy. His analysis of millennials went viral – and he became a worldwide sensation, which drew the attention of the iconic Grand Old Opry, where he has been a regular guest since 2019.

So how does someone catch fire in his 36th year of standup? The internet. Facebook, Instagram and TikTok have suddenly led millions of people to Brad’s comedy and they have discovered a comedian that has mastered the nearly impossible task of appealing to people from the ages of 18 to 80. No one has been more surprised than Brad; he has been very humbled by the newfound fame at this point in his career and is currently working feverishly all over the country to take advantage of his moment in the sun.

105.7 KQAK-FM is proud to welcome Brad Upton to The Tower Theatre on Saturday, March 11, 2023 at 7:00 pm, with opening act Carl Click (former KATU-TV and KGW-TV news and sports anchor/reporter).

Brad Upton's comedy is recomended to people 18 years and up.

Looking to purchase tickets to the 7PM show? ​CLICK HERE!