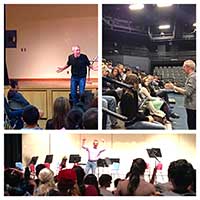 The Tower hosted one educational matinee at the theatre, and presented seven school assemblies in the Bend La-Pine School, Jefferson County, and Culver School Districts.

“This was the year we deepened our connections with teachers and principals all across the region,” said Tennant. “From Mexican Mariachis to African Acrobats, the Tower brought the wide world of performing arts into classrooms, and enabled teachers and homeschoolers to use nationally renowned artists to enrich their own curriculum.”

The impact on students was equally impressive. “My students were energized and excited about theatre at a level I hadn’t seen before,” said Lara Okamoto, theatre teacher at Summit High School. “I can’t wait for the next project!”

Kathy Grant, 3rd grade teacher at M.A. Lynch Elementary in Redmond, taught in Phoenix, taking her classes on annual field trips to the symphony, dramas, and musical presentations. “When I started teaching in Redmond I asked around about cultural field trip opportunities. Nobody seemed to know of any,” explained Grant. “When I heard about the LessonPLAN programs, I immediately signed up. My students were so impressed; not only with the shows, but also by the beauty and history of the Tower. None of my students had been there before and very few had attended a live performance of any type. Many are from low-income households and, without the Tower’s efforts, would never get opportunities like this,” Grant concluded.

The Tower’s LessonPLAN initiative is underwritten by Bank of the Cascades, BendBroadband, and the theatre’s Stover Fund. Grantors in 2014-15 included the Oregon Community Foundation, Children’s Edu-Investors Fund, WHH Foundation, NEA, WESTAF, The Clabough Foundation, and the Deschutes Cultural Coalition.

The nonprofit Tower Theatre Foundation owns and operates the historic stage in downtown Bend. The Foundation’s mission is to be the leading performing arts organization, providing cultural and education programs that make an essential contribution to Central Oregon’s lifestyle and strengthen the community.

The 2015-16 LessonPLAN lineup will be announced this summer.