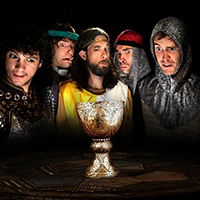 Produced by Stage Right Productions, with book and lyrics by Eric Idle, music by John Du Prez and EricIdle, “Spamalot” is the irreverent parody of the legend of King Arthur and his Knights of the Round Table, featuring a bevy of beautiful show girls, cows, killer rabbits, and taunting French people. The “no-holds-barred smash hit” (New Yorker) was lovingly ripped-off from the 1975 comedy film “Monty Python and the Holy Grail.”

The Stage Right production of“Spamalot” features a cast of 22 local actors. In true Python fashion, several of the male actors play multiple roles, including women. Directo rDavid DaCosta has been working with the cast for months. “We've harnessed some unique comedic creativity while staying true to the essence of Monty Python. Our goal is to give your stomach a workout with belly laughs!”

The Tower will also screen a Python-athon of the classic comedy movies “Life of Brian” (September 17) and “The Meaning of Life” (September 18).

As an added bonus, the Tower hosts a free Spamalot Sneak Peek First Friday September 6, starting at 6pm. The cast and crew will share songs, scenes and dance numbers from the show.

“As U.S. Bank celebrates our 150th anniversary, we are thrilled to partner with the Tower Theatre Foundation in supporting local talent, including bringing this brilliant and funny production to Central Oregon,” said Stacey Dodson, Central and Eastern Oregon Region President of U.S. Bank. “Both U.S. Bank and the Tower have a long heritage of supporting arts and culture in our community and enriching thelives of those who call this beautiful place home.”

Tower Theatre Foundation Executive Director Ray Solley adds: “With musical director Scott Michaelsen and choreographer Dakota Weeda, David and Sandy have put together a wonderfully silly and energetic musical comedy. Anyone who disagrees shall be catapulted over the castle wall.”

The nonprofit Tower Theatre Foundation owns and operates the historic stage in downtown Bend. The Foundation’s mission is to provide cultural and educational programs that make essential contributions to the region’s lifestyle and strength of community. Membership, program information and individual and group tickets are available at the boxoffice (835 NW Wall), by phone (541-317-0700) or online (www.towertheatre.org). Details on events are also at www.facebook.com/TheTowerTheatre.

Onefree admission with each ticket purchased to Spamalot