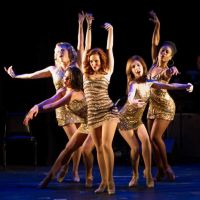 Five singer-dancer-actresses and a live band celebrate the rock ‘n’ roll of Broadway, the best of pop radio, and 1960’s girl groups. June 29 and 30 are perfect “girls nights out” as the Tower Theatre Foundation presents The Broadway Dolls. It’s a weekend of show stoppers,rock anthems and power ballads from Mamma Mia, Grease, Chorus Line, Chicago—just to name a few! Broadway Dolls is the first installment of the Tower’s 2013 Marquee Series, sponsored by U.S. Bank and BendBroadband.

The Broadway Dolls was created in 2007 by Broadway veteran Hollie Howard while she was in the original company of Hairspray. The quintet debuted at the 2011 New York Musical Theatre Festival, and has since played throughout North America and China.Their imaginative and sexy revue showcases nearly 50 classic Broadway show tunes, many of which the Dolls themselves performed in New York productions,including Mamma Mia, Grease, Spiderman, Chicago, Rock of Ages, Chorus Line and Rent. Plus, the Dolls mash up American standards like “Singin’ in the Rain”with current hits by Lady Gaga and Carly Rae Jepsen. They also pay homage to1960’s girl group favorites “Heatwave,” “One Fine Day,” and “Leader of the Pack.”

Ray Solley, executive director of the Tower Theatre Foundation, calls the Dolls’ live stage show “the perfect way to party with friends and visitors in town for Bite of Bend or the Fourth of July holiday. It’s full of hits you know and love. Dancing and singing along will be encouraged!” Solley added.

The nonprofit Tower Theatre Foundation owns and operates the historic stage in downtown Bend. The Foundation’s mission is to provide performing arts, civic, educational and social events that enliven and enrich the lives of all Central Oregonians. Membership,program information and individual and group tickets are available at the box office (835 NW Wall), by phone (541-317-0700) or online (www.towertheatre.org). Details on events are also at facebook.com/TheTowerTheatre.